A cohabitation agreement contains documentation for a couple who want to live together in order to protect themselves from unnecessary cost and litigation should their cohabitation break down. They can clearly regulate their property rights and what arrangements might be made for mutual financial support, dealing with debt, caring for children, etc.

The agreement also, much like a prenuptial agreement, allows the individuals concerned to determine in advance who will keep specific assets and what will happen to assets that have been purchased jointly if they separate. This agreement is intended to bind both parties.

A cohabitation agreement will usually not be adequate to settle all legal issues that might arise, so a trust deed setting out property rights and a will are also recommended.

It is a common misconception that there is a doctrine of “Common Law marriage” in English law. That is to say that without having married, there is no automatic right to home ownership, even if the home is shared for a long time. Instead, the only way in which ownership can be obtained is through ordinary trust law. Interestingly, even if the parties are legally married, there is still no automatic right to home ownership. Instead, any transfer of ownership will be at the discretion of the court when exercising their power under the Matrimonial Causes Act 1973.

There will still be large legal differences between civil partnership and marriage. For example, a couple can get married and have all the legal rights and benefits after knowing each other for only a few days, but a same-sex couple will almost certainly be required to show a lengthy commitment to each other before they are allowed to register their partnership. Currently, for immigration purposes, a same-sex couple must show they have a relationship of two years’ standing, and it is likely that a similar term will be imposed for registering a partnership. Consequently, same-sex couples will need to make wills and a cohabitation agreement, to provide security in the event of break-up.

In the United States, a cohabitation agreement offers fewer legal protections than a registered domestic partnership.

As aforementioned, the term is also sometimes used loosely to refer to prenuptial agreements. 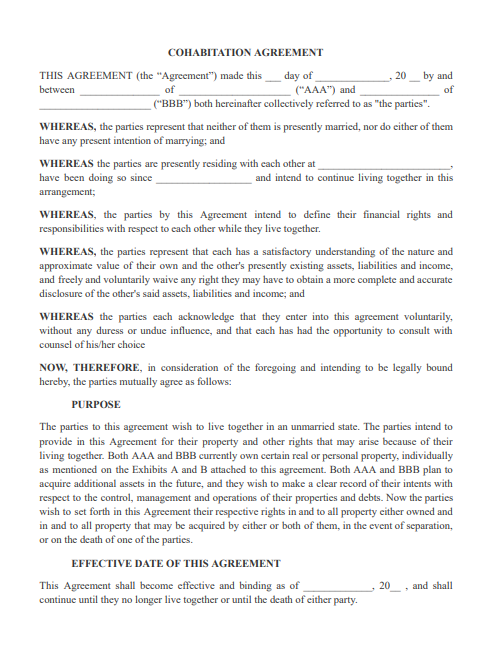